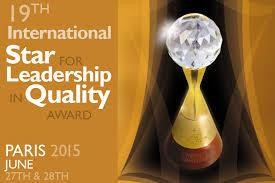 Accra, May 30, GNA – Sixth Sense Manifesto, a Brand Management Agency would be awarded the 19th International Star for Leadership in Quality Award (Gold Category) in June in Paris, France.

The International Star for Leadership Awards is an annual award ceremony organised by Business Initiative Directors (BID) to recognise the prestige of outstanding companies, organisations and businesses globally through quality, excellence and innovation management.

A statement issued by Ms Nadia Takyiwaa-Mensah, Chief Executive Officer, Sixth Sense Manifesto said the decision to present the award was based on a voting process by business leaders who participated in the International Quality conventions in 2014 and BIDs regulating committees.

Sixth Sense Manifesto has been operating on the continent for five years and has worked with brands and companies including: Merck, Vodafone Ghana, IFC, Wilmar Africa, Huawei, Remy Martin, Saatchi and Saatchi – SA.

The 2015 ISLQ Award would take place at the Hyatt Regency, Paris Etoile on Sunday, June 28 and would be attended by companies from 74 countries.